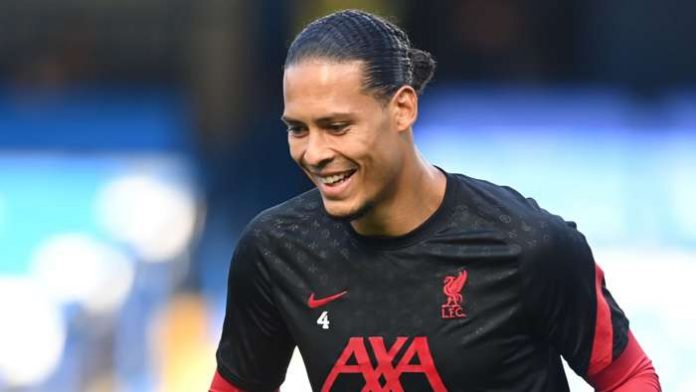 Jamie Carragher has said the time has come for Liverpool to stop offering up Virgil van Dijk’s absence as an excuse for the collapse of their season.

The Reds crashed to a 2-0 home defeat to Everton on Saturday, with the loss seeing the Reds match an unwanted record dating back 98 years, and they are now in danger of missing out on the top four.

Van Dijk suffered a serious knee injury in the reverse fixture with Everton in October, and Carragher feels his former club’s problems run much deeper than the Dutchman’s absence.

“Liverpool have been so poor, they have got everything deserved,” Carragher said on Sky Sports following the derby loss at Anfield.

“They can’t keep saying ‘Virgil van Dijk is out’. I’m sick of saying it myself.”

“Going forward is as big a problem as what we’re seeing defensively from Liverpool now. I know Liverpool have dominated possession but it doesn’t mean anything if you don’t create. And that is a big problem for this Liverpool team.

“Very rarely do you see Liverpool play now when you expect them to score.”

“2-0 doesn’t flatter Everton. They deserved to win it. In all the areas that really matter, they were better than Liverpool.”

Mohamed Salah tops the Premier League scoring charts with an impressive 17 goals, but his attacking partners Sadio Mane and Roberto Firmino have mustered only seven and six goals respectively.

That is in stark contrast to the previous two campaigns when the three netted at a stunning rate. In the title-winning season of 2019-20, Salah hit 19, Mane 18 and Firmino nine, while in 2018-19, when the Reds ran Manchester City so close, the numbers were 22, 22 and 12 respectively.

MP3: Zara Larsson – Stick With You