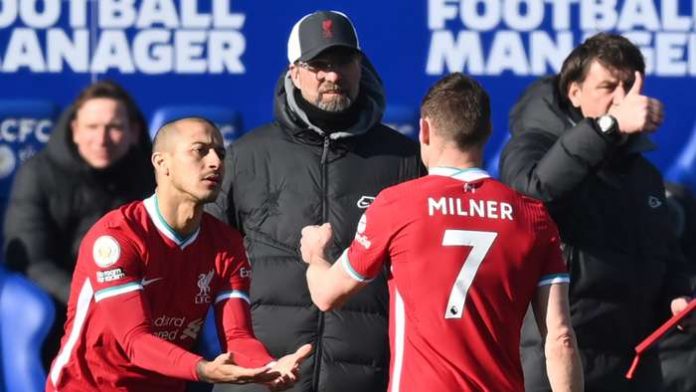 The Reds have a total of 10 players on the treatment table, with the former England international the latest to have suffered a knock

Liverpool have been hit with yet another injury problem, with James Milner having to be substituted early on in the first-half of the meeting with Leicester City.

The Reds now have 10 first-team players missing due to injury, with the problem suffered by former Manchester City midfielder Milner adding to Jurgen Klopp’s selection headache.

The 35-year-old walked off the pitch after just 17 minutes to be replaced by Thiago Alcantara at the King Power Stadium, with an untimely hamstring problem picked up.

What happened to Milner?

Milner wasn’t able to continue in the Premier League fixture against the Foxes, walking off the pitch to be replaced by Thiago after 17 minutes.

The 35-year-old, making just his seventh league start of the 2020-21 campaign, was visibly frustrated as he trudged off, having hardly featured this season.

Klopp provided an update on the veteran midfielder following a 3-1 defeat in the East Midlands, with the Reds boss telling BBC Sport: “Hamstring, I think. That’s what he said.

Which other Liverpool players are injured?

There are currently 10 first-team players out injured for the Reds, with many of them being defenders to severely limit Klopp’s options.

Indeed, influential centre-back Virgil van Dijk has been out of a while, and although Klopp offered a positive update on the Dutchman back in January, he is not expected to be back any time soon after suffering an ACL injury in October.

Joe Gomez is also out for the long-term and hasn’t featured since the 1-1 draw with Manchester City in November, and another central defender, Joel Matip, is unlikely to return before the end of the current season.

Versatile midfielder Fabinho, who has been filling in at centre-back at times this season, was also ruled out of the Leicester clash, with January signing from Preston Ben Davies another who is unavailable.

Naby Keita, meanwhile, is out with a hamstring issue and although he is closing in on a return, he wasn’t deemed fit enough to make the matchday squad at the King Power Stadium.

Klopp confirmed on Friday that Diogo Jota is set to be out for another “two or three weeks”, with the former Wolves winger having been absent due to a knee injury since December.

The other absentees include Divock Origi, who has been out of action with a thigh problem, and back-up goalkeeper Caoimhin Kelleher.

The overall injury situation has left Klopp needing to be creative with his team selections, with Jordan Henderson often called upon to play at centre-back, while youngsters such as Rhys Williams and Nathaniel Phillips have been brought in at times.