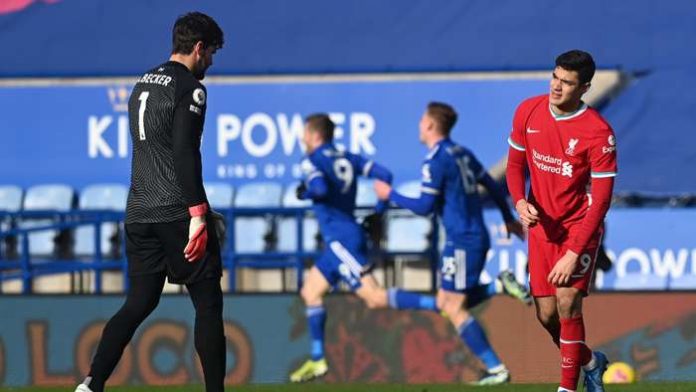 The Reds, who continue to see the Premier League title slip from their grasp, endured another afternoon to forget at the King Power Stadium

Liverpool’s struggles show no sign of abating, with the Reds hitting a seven-year low in a 3-1 defeat at Leicester while recording an unwanted Premier League first under Jurgen Klopp.

The reigning Premier League champions continue to see a title that they waited 30 years to claim slip from their grasp in 2020-21.

Injury setbacks and struggles for consistency have been doing their cause few favours, with another serious wobble endured at the King Power Stadium despite seeing Mohamed Salah fire them in front.

The Reds have suffered three successive top-flight defeats under Klopp for the first time since a German tactician inherited the reins at Anfield from Brendan Rodgers in October 2015.

The last time they became stuck in such a rut was back in 2014, when the current Leicester boss was calling the shots on Merseyside.

Liverpool have now collected no points from consecutive outings against Brighton, Manchester City and Leicester.

They remain fourth in the Premier League table, but are now casting anxious glances over their shoulder.

Chelsea and West Ham are just a point behind the Reds, while Everton are three adrift of their arch-rivals and Tottenham four off the Champions League-chasing pace.

A top-four finish could now represent the height of Liverpool’s ambition, with a 10-point gap still separating them from leaders City while taking in two more fixtures than the Blues.

What happened against Leicester?

James Milner was forced off inside 17 minutes to hand Liverpool another untimely injury headache.

The Reds appeared to have overcome that setback when taking the lead in the 67th minute, with Salah collecting a clever flick from Roberto Firmino to curl home.

James Maddison levelled matters, though, after a VAR review determined that his low free-kick should not be ruled out despite an offside flag being raised.

Jamie Vardy then benefited from another moment of madness from Alisson to put the Foxes in front, with Liverpool’s usually reliable No.1 racing out of his box and slicing the ball off debutant Ozan Kabak and into the path of Leicester’s top marksman.

Harvey Barnes raced clear five minutes from time to compound the Reds’ misery, with Klopp being forced back to the drawing board in a bid to try and ensure that a season which promised so much does not implode.

Bayern Munich beat Liverpool and Chelsea to signing of Upamecano